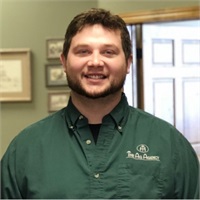 Adam, Vern’s son, was born and raised in the Pierre, SD area. He attended WyoTech, studying in service management, from there he attended Hot Rod Institute for two years, graduating with a degree in Hot Rod Technologies, and finished formal schooling at Lake Area Tech studying Ag Business one year later. Returning home, he took over the daily management of Armstrong Farms beginning in 2011.

In 2016, when Vern decided it was time to retire from farming, he joined The Ag Agency, and obtained his Crop Insurance license. In early 2018 he also obtained his Property & Casualty license. He is also a graduate of the Dale Carnegie class. He enjoys working in the shop on just about anything with an engine, and is rarely seen without his personal sidekick pup, Holley.